To get a good understanding of memory behaviour within a virtualised environment, let’s focus on three key areas.

To help define the interoperability of memory between the physical RAM installed in the server and the individual applications within each virtual machine, the three key memory levels are also described as follows.

Host physical memory - Refers to the memory that is visible to the hypervisor as available on the system.  (Machine memory)

Guest virtual memory - Refers to a continuous virtual address space presented by the guest operating system to applications. It is the memory that is visible to the applications running inside the virtual machine.

To help understand how these layers inter-operate, look at the following diagram.

Each virtual machine sees its memory as a contiguous addressable memory space. The underlying physical machine memory however may not be contiguous. This is because it may be running more than one virtual machine at any one time and it is sharing the memory out amongst the VMs.

The VMM sits between the guest physical memory and the Memory Management Unit (MMU) on the CPU so that the actual CPU cache on the processor is not updated directly by the virtual machine.

The shadow page table is also maintained by the virtual machine monitor. (VMM) 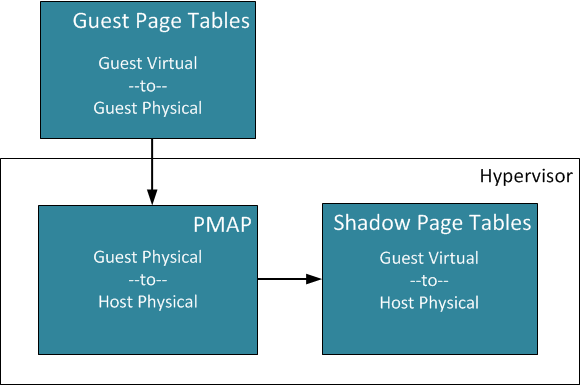 Each processor in the physical machine uses the Translation Lookaside Buffer (TLB) on the processor cache for the direct virtual-to-physical machine mapping updates. These updates comes from the shadow page tables.

Transparent Page Sharing is on-the-fly de-duplication of memory pages by looking for identical copies of memory and deleting all but one copy, giving the impression that more memory is available to the virtual machine.  This is performed when the host is idle.

Large memory pages may still be broken down into smaller 4KB pages during times of contention as the host will generate 4KB hashes for the 2MB large memory pages so that when the host is swapping memory it can use these hashes to share the memory.

Use resxtop and esxtop to view PSHARE field to monitor current transparent page sharing activity.  This is available in memory view.  See below.

You can disable TPS on a particular VM by configuring the advanced setting Sched.mem.Pshare.enable=false.

An ESXi host has no idea how much memory is allocated within a virtual machine, only what the virtual machine has requested. As more virtual machines are added to a host there are subsequently more memory requests and the amount of free memory may become low. This is where ballooning is used.

Provided VMware tools is installed, the ESXi host will load the balloon driver (vmmemctl) inside the guest operating system as a custom device driver.

The balloon driver communicates directly with the hypervisor on the host and during times of contention creates memory pressure inside the virtual machine. This tells the virtual machine that memory is contended, and ‘inflates like a balloon’ by requesting memory from the guest and this memory is then ‘pinned’ by the hypervisor and mapped into host physical memory as free memory that is available for other guest operating systems to use.  The memory that is pinned within the guest OS is configured so that the guest OS will not swap out the pinned pages to disk.  If the guest OS with the pinned pages requests access to the pinned memory pages it will be allocated additional memory by the host as per a normal memory request. Only when the host ‘deflates’ the balloon driver will the guest physical memory pages become available to the guest again.

Ballooning is a good thing to have as it allows the guest operating systems to handle how much of it’s memory to free up rather than the hypervisor which doesn’t understand when a guest OS is finished accessing memory.

Take a look at the figure below and you can see how ballooning works. The VM  has one memory page in use by an application and two idle pages that have been pinned by the hypervisor so that it can be claimed by another operating system. 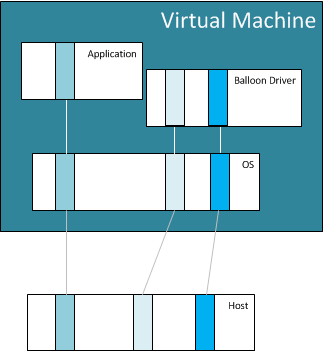 The memory transfer between guest physical memory and the host swap device is referred to as hypervisor swapping and is driven by the hypervisor.

The memory transfer between the guest physical memory and the guest swap device is referred to as guest-level paging and is driven by the guest operating system.

Host level swapping occurs when the host is under memory contention. It is transparent to the virtual machine.

The hypervisor will swap random pieces of memory without a concern as to what that piece of memory is doing at that time.  It can potentially swap out currently active memory. When swapping, all segments belonging to a process are moved to the swap area. The process is chosen if it’s not expected to be run for a while.   Before the process can run again it must be copied back into host physical memory.

Memory compression works by stepping in and acting as a last line of defence against host swapping by compressing the memory pages that would normally be swapped out to disk and compressing them onto the local cache on the host memory.  This means that rather than sending memory pages out to the comparatively slow disk they are instead kept compressed on the local memory within the host which is significantly faster.

Only memory pages that are being sent for swapping and can be compressed by a factor of 50% or higher are compressed, otherwise they are written out to host-level swap file.

Because of this memory compression will only occur when the host is under contention and performing host-level swapping.

Memory compression is sized at 10% of the configured allocated memory on a virtual machine by default to prevent excessive memory pressure on the host as compression size needs to be accounted for on every VM.

You can configure a different value than 10% with the following advanced setting on the virtual machine. Mem.MemZipMaxPct.

When the compression cache is full the first memory compressed page will be decompressed and swapped out to the hypervisor level cache.