BRAND NEW VMware Cloud Director Service (CDS) has just been launched for initial availability in US-West. Based on VMware Cloud Director (VCD) 10.1.0 in this initial build, this new micro-service powered (Kubernetes) SaaS offering from VMware will allow VMware Managed Service Providers to roll out a build version of their choice (VCD 10.1.0 or 10.1.1 or 10.1.beta or 10.whatever-comes-next!!).

The Beauty of this offering is that, because it is based on a micro-service model, it deploys really fast. At around 3 minutes to build VCD and a further 12 minutes to finish plugging it in, propagating DNS and other items, it’ll be up and running before you know it!

Ah, excellent question. I am glad you asked! Feature wise, it’ll be the same as you offer on site, even though the internal architecture is different, the service will offer the same thing. You might get the chance to use the newer features quicker using the service but those features will be rolled into the 6 monthly updates to the online service.
The real value here is with offering Managed Service Providers (MSPs) the ability to scale their offering much quicker.
Backed by NSX-T (currently 2.5) and running alongside VMware Cloud on AWS, it’s a SaaS solution that right now offers the ability to offer multi-tenancy within VMware Cloud on AWS SDDC infrastructure.

Perfect for those smaller organization’s that don’t require the full VMware Cloud on AWS offering with it’s huge amounts of storage and compute.
Agility is another, the ability to rapidly scale your capacity offering along side your data centre, or in the future across AZs and geographic locations.
In the not too distant future, it’ll offer the ability to provision services both in VMware Cloud on AWS and in your own data center.
Cost is a huge benefit of this. Think about it, at the moment you spend tens to hundreds of thousands of pounds kitting out your data centre racks with kit to run customer workloads on VCD, well now you can save a significant amount of initial investment by using the VMC on AWS service whilst retaining that managed service edge. Ok the cost to rent might be higher in the long term, but typically that takes at least a year to start seeing a profit on new kit. If customers want a longer term deal rather than a pay monthly offering you might be better off running their workloads on your own kit. I am not involved in pricing at VMware so you might be able to sweet talk your sales rep into offering you a discount for longer term deals. :-).
From what I understand the VMware Cloud Director Service is about 10% additional cost on top of the VMC on AWS managed environment.

On that last one, within VMC on AWS you normally only get two gateways. A management gateway and and compute gateway. When you use CDS with an existing VMC on AWS environment, the CDS will create a new Tier-1 Gateway to provide an Edge Gateway into Cloud Director. This is created automatically when you create a new Edge Gateway within CDS. 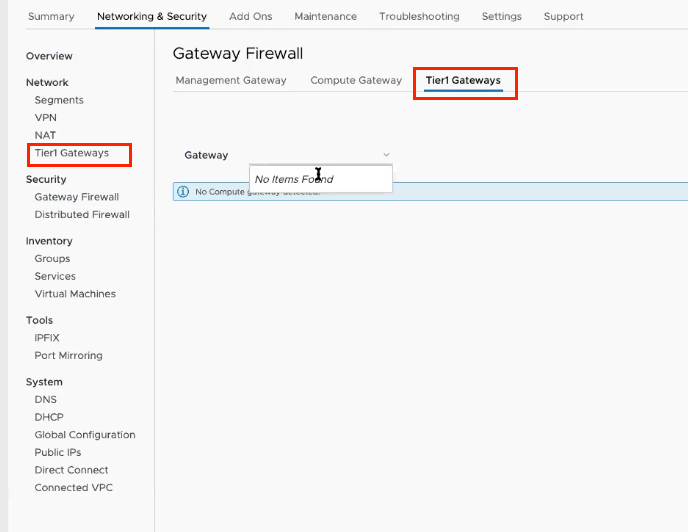 It will allow the provider greater visibility into the interfaces from within VMC on AWS. Useful for root cause analysis (RCA). At the moment this can only be created from within the API, or you can let CDS create it for you.

Sounds great! Where do I start?

First thing is you will need a VMC on AWS account and the VMware Cloud Director Service access. Speak to the VMware account team about this. At present they are offering it as 1 or 3 year offering to MSPs.
Once set up, you can access it via https://cloud.vmware.com/ and click on the console icon. 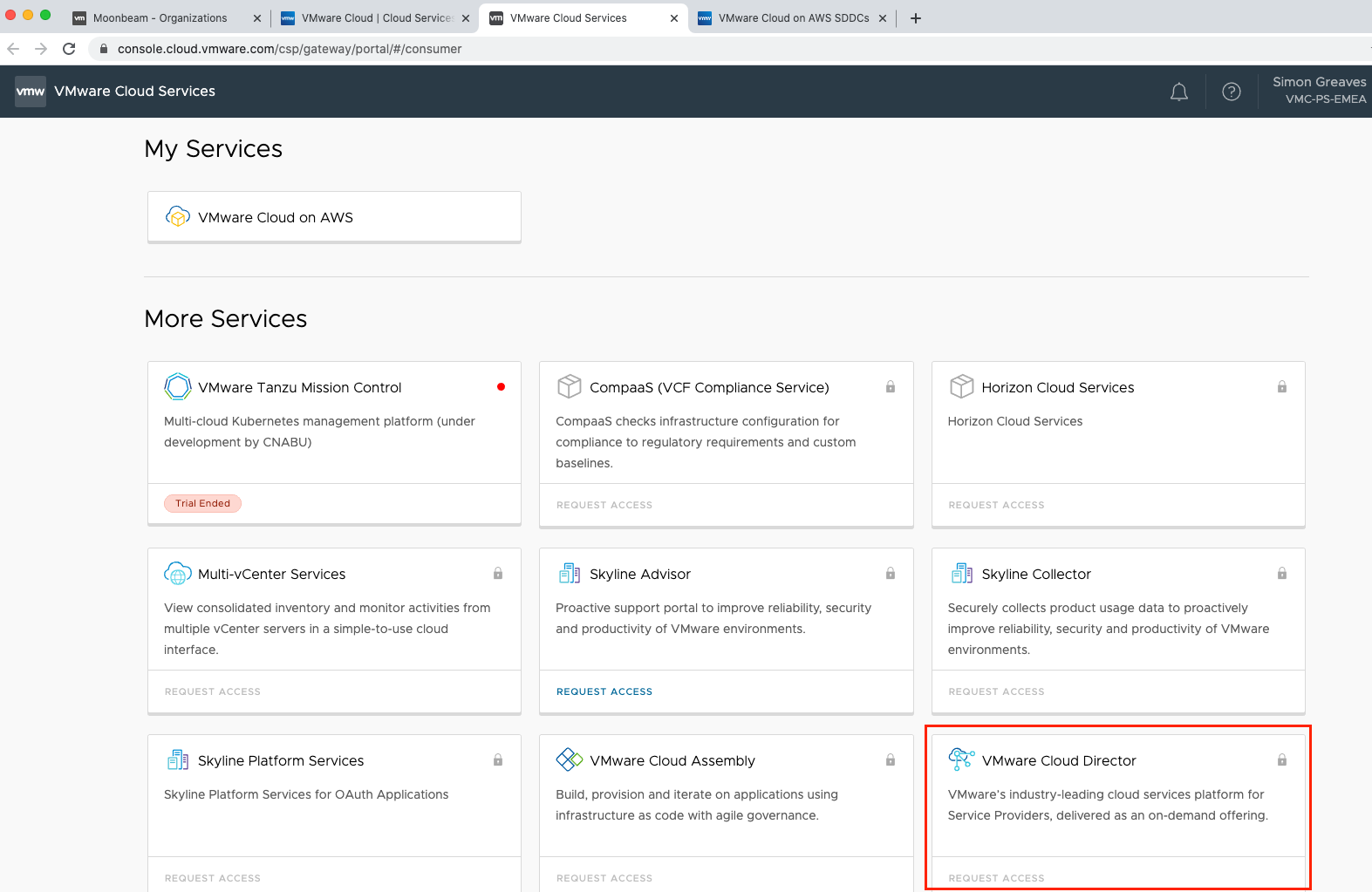 What’s not there yet?

3rd Party Backup Ecosystem Vendors are working with VMware to integrate their solutions, such as Veeam, Dell and others to offer a backup integration with CDS.
Disaster Recovery DRaaS solution VMware Cloud Availability is not quite ready for CDS but it will be coming soon. This will offer the ability to use this environment as a disaster recovery location for on-premises VCD or vSphere workloads. Or to protect workloads into VMC on AWS in another availability zone (AZ).
S3 Object Storage Cloudian virtual appliance will offer integration from within the Cloud Director UI and Amazon S3 buckets.
Micro Services App services K8s are not currently available in CDS but they will offer the ability for developers to curate content on an infrastructure as code platform.
Other services Things like VROps Cloud, HCX and other currently available services will be integrated soon.
Additional Sites Frankfurt is next, then an APJ location, then is where customers want to go. If you have somewhere in mind, pester your VMware Rep!
Cloud Director on anything else! VMC on AWS is currently the only location supported, but the plan is to roll it out across other services, such as VMC on Azure, Google and maybe even on site.
RabbitMQ VCD has been using ActiveMQ internally for a while and RabbitMQ as an external message bus. RabbitMQ and ActiveMQ as a construct will be phased out and be replaced by Artemis. Artemis, built into future VCD builds will have it’s own websocket protocol API that you can use to connect to the message bus.
In the meantime, you can bring your own RabbitMQ.

Can I take a look?

Once you have access to CDS you will need to associate it with an existing VMC on AWS SDDC. To do this, open the CDS service, click on the Actions icon and select Associate SDDC.

Then type in the API token for the VMC on AWS SDDC token.

FYI this association will be automated to a certain degree soon but at the moment you need to add the API token, UUID and SDDC name manually.

I’ve have however had the privilege of being given early access to the service to kick the tires a bit on CDS. If you’ve used VCD 10.1 elsewhere, its basically the same but here is a video showing some of the features and capabilities.