This is part 2 of my guide, you can read part 1 here

Quite a few improvements have been made to storage with vSphere 5.

You can configure Storage Profiles from the Home screen in vCenter Server. 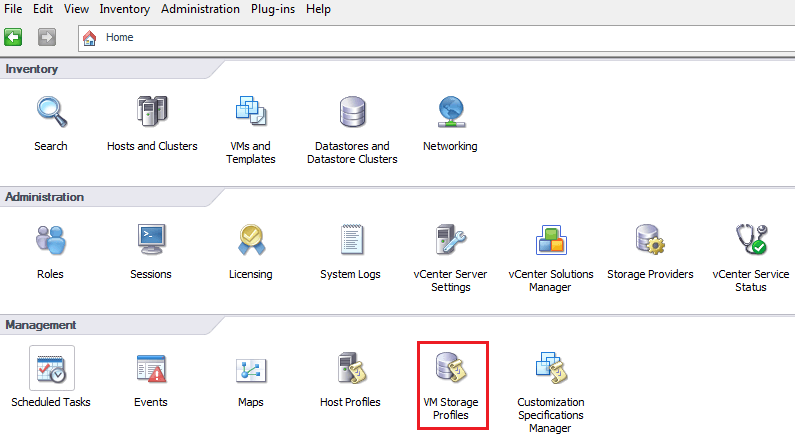 The vSphere Storage Appliance (VSA) is designed as a way of providing the cool features of vSphere, such as vMotion, HA and DRS without the requirement for an expensive SAN array.  It is made up of two or three ‘greenfield’ ESXi servers which act as dedicated storage devices.  It is not possible to have any virtual machines running on these servers, but the costs of such servers can be much cheaper than a dedicated SAN. 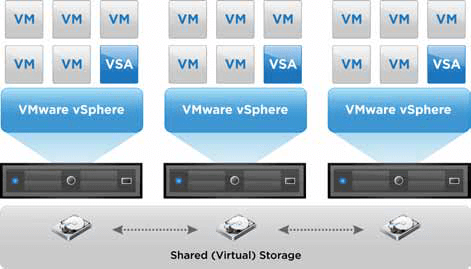 The vSphere Storage Appliance is managed by VSA manager through the vCenter Server.  The VSA manager allows replacement of a failed VSA cluster member and recovery of an existing VSA cluster.
To prevent split-brain scenarios a majority node cluster is required.
With a three-node cluster a majority of two nodes is required and with a two-node cluster a VSA Cluster Service acts as a tertiary node. The VSA Cluster Service run on vCenter Server.

The VSA cluster will enable vMotion and HA on the cluster for the virtual machines that are running on the VSA cluster.

It is an important design consideration that the storage requirements for the hosts in a VSA cluster will at least double to an account for the volume replicas that are created.

No VMs on the ESXi hosts participating in the VSA cluster
No virtual vCenter Server anywhere on the cluster
One datastore on each server, and it must be local storage
Only a short list of servers officially supported, however it will probably work with most
ESXi hosts must be the same hardware configuration
Minimum 6GB RAM per host
RAID controller that supports RAID 10 per host

Back End: enables communication between

If upgrading to ESXi, it keeps the existing MBR format and block sizes.  Once upgraded go to configuration tab in datastores and select upgrade to VMFS5, then it will support the larger sizes, however the underlying LUN will remain in the MBR format until it is reformatted.

Using GUID, all new datastore block sizes are now 1MB, however if you do upgrade then the block sizes will remain the same for that upgraded hosts datastores.  Not that this is an issue as explained you will be able to support up to 64TB volumes.

The underlying sub-block is now 8KB rather than 64KB, these means that less space is wasted due to stranded data from small files in the larger blocks.  Once sub blocks get to 1mb they will be in 1mb block sizes.  If a file is less than 1kb size then the file is stored in the file descriptor, which is a 1kb file that sits on each storage array.

VMFS5 uses Atomic Test and Set (ATS) for all file locking, ATS is an advanced form of file locking with smaller overheads when accessing the storage metadata than what was used with VMFS3.  ATS is part of  vSphere Storage APIs for Array Integration (VAAI).  ATS was available in v4.1.

VMKernel can automatically detect, tag and enable an SSD LUN.  This is particularly useful with Storage Profiles.

If you want to set a limit based on MBps rather than IOPS, you can convert MBps to IOPS based on the typical I/O size for that virtual machine.  For example to restrict a virtual machine with 64KB  per I/Os to 10MBps set the limit to 160 IOPS. (IOPS = (MBps throughput / KB per IO) * 1024)

Storage DRS or SDRS is a cool new feature that as the name suggests allows for the distribution of resources on the storage LUNs.  There are a couple of options to choose from when setting, from No Automation and Fully Automated.  The automated load balancing is based on storage space utilization and disk latency.

At this time it is recommended that you configure storage DRS for all LUNs/VMs but set it to manual mode.  This is recommended by VMware to allow you to double check the recommendations made by SDRS and then either accept the recommendations or not.  The recommendations are based on disk usage and latency however I expect that soon it will prove itself a most valuable asset in cluster design, removing the need to work out how much space is required per LUN or where to place the disk intensive applications in the cluster.  It is possible to disable SDRS on a schedule, for instance when performing a backup due to the increase in load on the datastores, you don’t want SDRS to start moving virtual disks around every time latency increases due to routine backups.  SDRS needs to run for 16 hours for it to take effect.
SDRS requires Enterprise plus licensing.

A SDRS cluster is set through Inventory>Datastores and Datastore Clusters.

vSphere 4 introduced support for Fibre Channel over Ethernet (FCoE) with hardware adapters, now software FCoE is supported in vSphere 5. So now it is possible to use NICs that support partial FCoE offload.  NICs with partial FCoE Offload are hardware adapters that contains network and FC functionalities on the same card.  It is also referred to as a converged network adapter (CNA)

Ok not a new feature per-se, but improvements have been made with hardware acceleration for thin provisioning, it helps in reclaiming space and also in monitoring usage of thin provisioned arrays. It Works on VMFS3 and VMFS5 (Providing you are using ESXi 5)

With the older form of thin provisioning, problems can occur with accumulation of dead space.  VMFS5 will be able to reclaim dead space by informing the array about the datastore space freed when files are deleted or removed by svMotion.  It also monitors space usage.  This feature monitors space usage on thin-provisioned LUNs and helps administrators avoid the out-of-space conditions with built in alarms.